For the last six months, I have been crowdfunding my novel The Backstreets of Purgatory with Unbound. Although I am making good progress, certain things are beginning to concern me. Recently I have noticed that when I start a conversation, my partner’s eyes glaze and he stares wistfully over my shoulder as if he is reminiscing about a time when our conversations sparked with such intellectual firecrackers as whether it is acceptable to add milk while the tea bag is still in the mug, or whether Cheddar or Gruyère makes better cheese on toast.

Worryingly, whenever we are out and about and I open my bag to rummage through it, he flinches and distances himself from me as if I’m about to batter him with a baseball bat, which is frankly ridiculous because my handbag can barely accommodate my supply of publicity flyers (which I whip out and thrust on innocent bystanders at every opportunity) and has no space for medium-to-large pieces of portable sports equipment. Sadly, he has stopped laughing at my jokes (and has caused me to question if he ever did) and has on occasions dragged me kicking and screaming from my computer for the most mundane of reasons (like, for example, to eat a meal). He has no sympathy for the repetitive strain injury that has all but incapacitated my track pad finger because it is apparently patently unhealthy (and thus no one’s fault but my own) to refresh one’s funding target page as rapidly as one’s poor internet connection allows.

During the short-lived elation that comes with each pledge for my book and my ensuing enthusiasm (manifested most frequently by my boogying around the living room in a manner that would quite understandably mortify the younger members of my extended family were any of them—or worse, any of their friends—ever to spot me, although they will, no doubt, be reassured to know that I have drawn the line at twerking) he has jokingly bandied around phrases like these pledges being the ‘crack-cocaine’ or ‘jaeger-bombs’ of crowdfunding and has subsequently completely failed to comprehend the clammy-walled, lichen-lined, stagnant well of despair (and this, this, is the nadir of subtle understatement) in which I find myself when one, two, three days go by without a pledge. (‘It’ll be fine’; Fine? Are you kidding me?) When I wake with night sweats of cold panic that my funding may never materialise or with palpitations at the thought that it actually might, he sleeps on peacefully until I shake him awake to remonstrate at his deep-somnia and lack of compassion.

Moreover, each time I brainstorm him for ideas for my campaign, he says I’m doing great. On the rare occasions when I find myself more than arm’s length from my computer and my phone bleeps and I leap from wherever I happen to be uncomfortably perched and biting my nails to check it (in the process overturning a coffee table or trampling underfoot our elderly cat who is too arthritic to take appropriate evasive action) he comes out with such blasphemous comments as, ‘Stop obsessing about Twitter.’

Here, I present his utterly absurd ideas for coping with the psychological stress of crowdfunding a novel. Unfathomably directed, it would appear, towards me.

What am I supposed to say to that?  Honestly, I am not sure what planet he is on. The implication is that it is me who is difficult to live with.

Regards and all that kind of thing,

PS Any campaign tips would also be gratefully received.

*Is it me or does that mean, ‘Please moan to someone other than me?’

First of all, I am in no way qualified to help you. But as anti-expertise is the order of the day in these bizarre times, you’ll find I have a good line in quackery and jargon that may assuage many of the problems you are presently encountering. Reading between the lines (and, more pertinently, reading the actual lines), I would hazard that you are crowdfunding your novel. With nothing more than a quick glance at a buzzing website or two, I have come up with three simple, easy-to-follow tips for your campaign such that its success will proliferate like the internet equivalent of an influenza epidemic.☣

Make listicles. As in this case, they may have nothing to do with the matter in hand. So long as they are easy to read, numbered and feature in a click-bait title, your work is done.

Whenever and where ever possible fill your posts with pictures of your cat. Preferably doing something that a North American would term ‘adorable’, like this one: 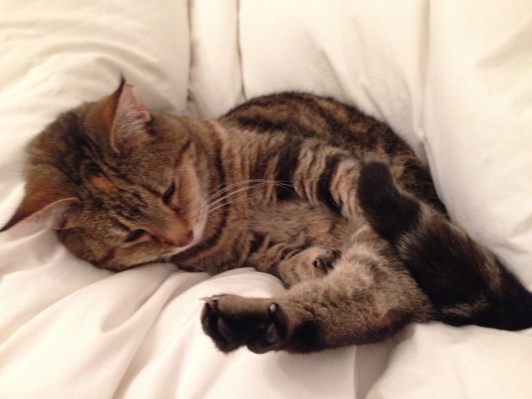 (I have it on good authority that you tweeted a vid of your cat doing drugs; this is not exactly what I had in mind. In future, think before you alienate the kitties-in-rehab community).

Unless your goal is to stupefy your audience into submission, avoid the following topics:

As I said, easy to follow, easy to carry out, unless your novel is about extracting paint pigments from slugs by filtering salted slug extract through a drip filter coffee machine. (I have it on good authority that you deleted that chapter.)

Unfortunately, as regards to the words of wisdom spouted by your partner, I can make no comment until I recover my faculties. If, indeed, these faculties are not already irretrievably lost.

3 thoughts on “Crowdfunding your novel: 3 campaign tips and 5 ways (not) to cope with the stress”

The Backstreets of Purgatory